This year I am going to try using Mixlr to do live nightingale broadcasts from http://mixlr.com/nightingalenights/    Bear with me … fingers crossed that it works You can also find this link tweet pinned to my twitter feed profile https://twitter.com/NgaleNights please follow @NgaleNights ! Tweets by NgaleNights 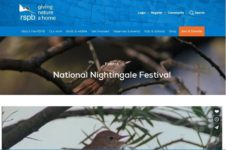 This year the RSPB has joined the campaign to encourage more people to celebrate live singing nightingales and promote cultural nightingale events by starting a ‘National Nightingale Festival’ website.  This has been created by Adrian Thomas of RSPB SE who also leads the Society’s work on Lodge Hill. Visit the … 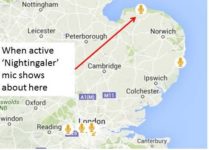 (4 5 16) FYI I have been trying (with mixed success !) to do my own live streaming  broadcasts of Nightingales from N Norfolk. Last night there were two maybe three birds singing, with a couple more a mile or so away but there are few spots with a good …

[updated 11 05 2016] Thanks to Grant Smith from SoundCamp and Locus Sonus for the gist of this advice: You can use a mobile phone to set up a streaming (ie direct live internet) broadcast of whatever the phone mic picks up.  Obviously this means you need a phone signal where you are …

Planning Resource intelligence magazine reports that ‘Developer Land Securities has pulled out of a scheme to build 5,000 new homes on a Ministry of Defence-owned site in Kent that was declared a Site of Special Scientific Interest (SSSI)’. Lodge Hill has the largest surviving population of Nightingales in Britain.  Let’s …

UPDATE 21 MAY 2015 On 19 May we sent the petition signed by 2800+ to BBC at Springwatch – on 20 May Rosemary Edwards BBC Springwatch editor replied: Subject: Re: Nightingale broadcast request Sent: 20 May 2015 18:26 Dear Chris, Thank you for your correspondence.  I have read your letter …

Visit the 38 Degrees Nightingale petition website to see all the interesting and often moving comments that people have posted as to why the support the petition for the BBC to re-start the annual May live Nightingale broadcasts.  (If you’ve not yet signed, do sign and you can add your …

A Nightingale has been singing regularly about 1030 pm in James Bradford’s garden. If it has found a mate – it may have stopped singing ! But otherwise we are going to try to stream it (below) from about 1015pm for half an hour or so, on Thursday May 14th. …

Buy cialis online free shipping. NEW DELHI: The government is likely to push through a cabinet decision soon to allow foreign investors, including multinationals, direct Cialis online cheap from canada access to the country's market through a single window if they have done research, worked on a project or produced and financed in the country, officials said.The idea to allow foreign direct investment is now being prepared with all stakeholders and it will probably be made public later and not before October 1, another official said. The Cabinet Committee on Economic Affairs would discuss the proposal this month and signoff on it before the Goods and Services Tax regime is in place."The government not against the direct investment by foreign corporates," the first official said, adding that it would not impact on any of the investment projects.But experts said move was needed because of the recent announcement by US-based technology firm, Cisco Systems, that it would cut investment plans in India by 25% as it is being forced to sell its intellectual property and services to China Korea."It is a good move. It needed. India cannot afford to take away foreign assets," said Ashwini Kumar, chief of the Asia-Pacific Asia Practice at Deloitte, India.The proposal is likely to face tough opposition from businesses and some other stakeholders who believe foreign direct investment gives the "false" impression that there is a lot of activity coming out India. But the government wants to see that foreign companies invest in the right areas.Officials said that although this will encourage foreign direct investment (FDI), more important, they said is the "clear delineation" between sectors for investors."The clarity on the line and how it applies across sectors may also help in reducing the risk of FDI by allowing the investors to invest in a wider range of sectors than what has been the norm already," said a second official.There are wide range of ideas about what the line should be set at as in case of a company looking at investing in an individual project, they said.The government may also push through several other changes for FDI."There is a big desire for more foreign direct investment in the sector. We need a clear view as to what are the investment opportunities and risks before we make any final decisions on FDI in India," said K. Venkatesh Sharma, partner and partner-india at Deloitte.There are, however, concerns over the regulatory side for allowing FDI in the IT, pharmaceuticals and IT equipment sectors. But senior officials said that the issue was not on their radar and the government would work through it and come out with the desired outcome. Ahead of announcement and release this week's issues of DC Comics, we take a look at the history of company's flagship characters through the 20th century, to find out what DC could have done to keep certain characters on their own: In October of 1938, the New York Herald Tribune ran an article with the tagline, "Who Could Be More 'Mental' Than Superman?" The article, written by reporter Frank Thomas, had the help of a mental expert, the Reverend Theodore H. Stearns (whose own work had appeared in newspaper articles 1938), canada drugs online fax number who said that Superman, the "Sensible Man," was "greatest of all human mentalities." Stearns also suggested that a Cialis 30 Pills 20mg $125 - $4.17 Per pill man should be able to live a life of happiness "with God as his only Ruler and Saviour, goal to live die doing exactly what he ought to do." With that in mind, Stearns went on to speculate, "What happens Superman, if all he wants to do are the things that we all want to do—make the world a better place for humanity, and live in that wonderful age of progress when mankind will be united in a common purpose?" The newspaper's article, "Superman Has Been Sane for Two Years," was published on Thursday, October 3. In 1938, this line of thinking was a fairly common one. year earlier, author and critic Edgar Allan Poe would comment on the "impossible" qualities of Superman, saying "What an inconceivable person this Godlike being is!" Poe was perhaps making fun of the "sensible man," but he was right about that quality having tremendous value. Indeed, in some ways, it has far-reaching implications as to the nature of.